Of the 6 major player types, TAG is the most important.  The average grinder employs a TAG poker strategy and many players should learn a TAG style before doing anything else.  TAG is an abbreviation for “Tight Aggressive” and is in between a nit and a LAG.  In this guide you will learn what a TAG is, get ideas on their ranges, and get some easy-to-use advice for beating them.

What Is A TAG?

Each poker player has basically 2 decisions when the action gets to him – will he fold the hand he’s dealt, or play it?  If he decides to play, then he has one other decision – will he call the amount of the current bet, or will he raise it up?

Each player has his own decision-making process for deciding which hands they are going to play and which they will fold.  Some players will play every single hand as long as there is no raise (“let’s see a flop, you can’t win if you don’t play!”).  Other players will always fold certain hands but always play others, regardless of the action before them (“deuce-four is my favorite hand”!).  Still others will use other criteria besides their cards for deciding what hands to play – things like their position relative to the blinds or their likely opponents in the hand.  As your poker skills improve your decision matrix for choosing which hands to play gets simpler.

We describe the number of hands that a player will play as either being “loose” (plays lots of hands) or “tight” (plays few hands).  The TAG player follows the latter strategy – he plays relatively few of the total hands he is dealt.  Most TAGs play less than 1 out of every 5 hands they are dealt, meaning that they’re folding preflop over 80% of the time.

Did you know that folding too much is a HUGE issue? See why being too nitty is a big leak…

The second decision, whether to call the current amount of the bet or raise, describes whether a player is “passive” (tends to call), or “aggressive” (tends to raise).  The TAG player tends towards the latter – he stays aggressive most of the time.  If you plot the two decisions onto a coordinate system, where loose/tight makes up the x-axis and passive/aggressive makes up the y axis, you’ll see the TAG player in the upper right of the coordinate system. 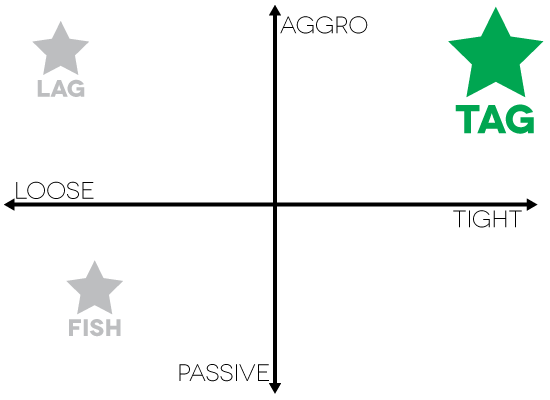 I would add one further defining characteristic to most TAGs – and that is that they are aware of the power of position at the table. Most TAGs have learned that nearly every decision in poker is easier when you are the last to act, and they tailor their decisions to making sure that they play in position as often as possible.

Should You Play A TAG Strategy?

If you are at the beginning of your poker career and are trying to learn how to play well, the unequivocal answer to this question is YES, you should strive to learn as much as possible about the TAG style and why it is successful.  As mentioned above, TAGs have learned good hand selection and the power of position – these attributes help keep him out of too many tough spots, and give him a clear advantage over beginning players who are willing to play a weaker starting range of hands without having position. TAG players can make money at low stakes games by taking advantage of players who haven’t learned as much yet.

How Do You Beat TAGs?

Once you learn the TAG style, you’ll have a clear edge over the bad players (usually the loose passives and the tight passives on the graphic above), but you won’t have much of an advantage over the other TAGs at the table.  In fact, if you find yourself at a table full of nothing but TAGs, you should probably leave the table – there isn’t much money for you to win there – the only big pots you stand to get involved in are “cooler” type hands where two of you flop sets or monster draws.  We don’t win money long term by trading coolers with other good players.

With that in mind, you still will find yourself at tables where there are plenty of bad players to pick from, but there are also a few TAGs sitting as well.  Instead of simply avoiding these players completely, here are three things you can be doing to make sure you’re eking out a bit of profit from them, as well.

Having TAGs on your left is usually not a terrible situation because they are often going to give up their blinds without a fight.  TAGs have learned not to play pots out of position, and being in the blinds means that you have poor postflop position for the entire hand.  Many TAGs will make no effort to defend against a steal – they will simply look at their cards and fold them, sometimes upwards of 80% of the time!

Remember, TAGs hate to play out of position.  When you have the dealer button, you are guaranteed to have position over every other player at the table for this hand.  If a TAG opens in front of you, you often have a prime resteal opportunity.

Look at the graphic below – on the left it shows a typical TAG opening range from middle position of about 15% – he is raising all pocket pairs and most unpaired broadway hands.  Which of these hands is he going to continue with if you reraise him?  A good TAG will fold the smaller pairs, knowing he cannot profitably try and flop a set on you  (depending on the effective stack sizes).  He will definitely fold all the “trouble” hands like KQ, KJ, and JQ.  Some TAGs will even fold hands like TT, AQ, and AK!  The right side shows what hands the many TAGs will continue with if you reraise – notice that they’re folding between 2/3 and 3/4 of the time.

Once again, if you identify a situation where somebody is going to fold 75% of the time, you usually make that play without even looking at your hand, and you will profit long term.  Look for situations where you think a TAG will fold to your button re-steal.

TAGs have often learned one of the most common bluffs in Texas Holdem – the “continuation bet” – which is a bet on the flop no matter if their own hand has hit this flop hard or not.  On certain types of boards, the TAG will often continuation bet 100% of the time, no matter what he is holding.  Interestingly, these same boards are often the same ones that make it very hand to have a strong hand.

Take an example board like K♠  7♣  3♥.  A TAG will like his hand if he has pocket kings, sevens, or threes, and he’ll be pretty comfortable with AA or AK and maybe KQ, but what about all of the other hands he could have?  Pocket eights thru queens, AQ, AJ, QJ, and plenty of other hands that a TAG will open have missed this board entirely.

Without getting into the background math too deeply, you can often simply put in a raise of a TAG’s continuation bet on dry, unconnected boards like this, and there isn’t much the TAG will be able to do about it (unless he wants to re-bluff you with ace high or second pair).  The TAG will assume you’ve flopped a set on him and fold.  Some TAGs will even fold top pair or an overpair to these raises (learning the maxim “don’t go broke with one pair”), meaning these bluff raises will work even more often!

Playing the TAG style is one of the first milestones in a poker student’s journey to becoming a good player, and you should learn about this style and attempt to adopt its principles as soon as possible if you’re studying how to learn poker and play it well.  But TAGs aren’t playing perfectly, either, and you should be able to use some of the tricks above to make sure you can hold your own against them at the tables.