Bluffing The River With Multiple Players

I was recently discussing a hand with some players and I felt it needed to be shared. This was a spot where hero was bluffing the river with multiple players involved. Multiway pots can be confused as-is, but things get even more complicated when the stack sizes are varied. But rather than bore you with the preliminary information, let’s get to the hand:

Jack is a bad loose player. He’s been limping a ton preflop and playing pretty badly postflop. Our isolation here is 100% standard, both in terms of our hand and size.

The big blind is a weak tight (WT) player. He ran like God when he first sat down running his $500 up to $2k. Since that spurt of hands he’s been playing very nitty both preflop and postflop. His preflop call is a little unusual for him, but it hints at a pretty narrow range of hands.

Hero catches a nice flop for his hand with overs and a two-way straight draw. Hero will pick up the pot a decent amount on the flop and when he doesn’t he has a lot of equity with two cards to come and position. However, Hero faces a check/raise in this situation and a cold call which is unexpected.

Luckily for us the WT player sizes his check/raise poorly and we pick up the extra player along the way. This gives us an even better price to call and an extra source of implied odds. I’m not loving the fact that our improvement cards aren’t the greatest in the world (the Eight fills up the 4-straight on board)…but I’m not folding either. I’d assume the WT player has a big hand (by his standards), likely two pair or a set, and just has no idea how to size correctly postflop. Also remember that WT players tend to think of bet sizes in absolute dollars, so if $175 seems like a lot of money to him in real-life he may think his check/raise is large (even though it’s small relative to the pot).

Again the WT player makes an horribly sized bet. Once Jack calls we are getting almost 5:1 on our money and can easily call with just a draw. Really not much to talk about here as this is strictly a pot odds decision and luckily for Hero, he got ’em.

The river pairs the board and now things get interesting. Both players check to Hero on the river and Hero needs to decide if he wants to check behind or go all-in as a bluff the river. On the river the stack sizes are:

In the actual hand Hero did decide to shove the river. When describing the hand he kind of glossed over the river situation and said he thought they’d fold enough to make the shove +EV. I wasn’t convinced so I had to pull out the math and get to work to proof it. So here is the math:

[box type=”info”] Not sure how to use EV? Watch this free Easy Poker EV Video[/box]

First we need to assign some ranges. I personally think that the WT player has one of two hands: T9s or 97s. I think if he had TT, 99, or 77 he would have shoved the river. A WT player isn’t going to check the river to try and induce after he’s taken this line. Which means his check is likely a two pair that hates life when the bottom card pairs the board.

Now because he’s a tight player I think he will call T9, being unable to fold getting ~3:1 on a call. But I think he will fold 97s thinking his two pair got negated by one of us. A WT player isn’t going to be a good hand reader so I don’t worry too much about what I rep against him. I just care that he will fold enough since his decisions are based more around his own hole cards and comfortability. So I assume* if I shove he calls 50% of the time and folds 50% of the time. Easy enough. 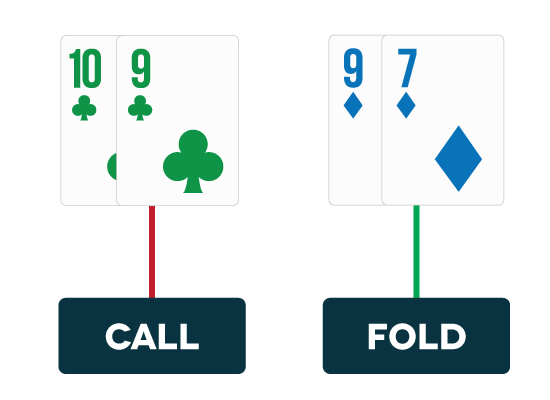 Jack’s range is really up in the air. Because he’s a bad player he can easily show up with a wide range of hands. When he gets to the river I assume his range looks something like this: 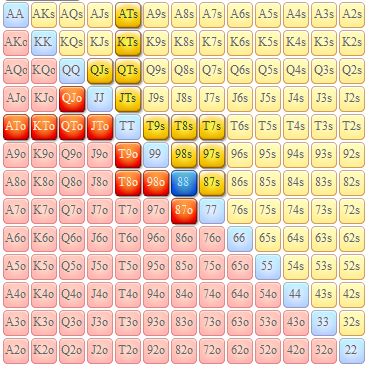 I think he would have gotten active somewhere with the made straight or sets. Either by re-raising the flop, raising the turn, or shoving the river once WT checks. So the assigned range seems reasonable for a player of his caliber (both preflop and postflop). But we also need to make an assumption on the range he would call our river shove with. I’m going to make an assumption* that he will call with any pair of Tens or better and fold the rest. It may not be perfect, but it’s a starting point. Taking our hole cards into account he has top pair+ 61% of the time…

Now we can just factor things into an EV formula and solve. I find it easiest to start by drawing a tree diagram and then doing the math accordingly. If we shove there are essentially 4 different outcomes (or branches of the tree):

In three of those outcomes we lose money since our Queen high will never be good once called. The only time we win is when both players fold and we pick up the $1,217 uncontested. But we also need to remember that we can lose varying amounts of money in certain branches. In branch 1 and 2 we lose our full $625 since the WT player covers us. But in branch 3 we can only lose $325 since the WT player folds and we lose against Jack. The tree then looks like this: 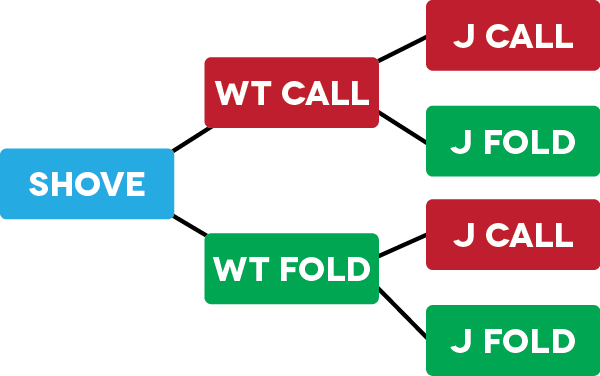 Next we need to plug in percentages of folds. Well we know the WT player is going to fold 50% and call 50% based upon our assumptions. We also know that he calls with T9s and folds with 97s. So when he calls with T9s it will influence the combos left in Jack’s range. When he folds 97s it will allow for more combos of Tx in Jack’s range. The WT player’s action influences combos which in turn influences the number of folds we can realistically get from Jack. Now the tree looks like this with the correct percentages in place: 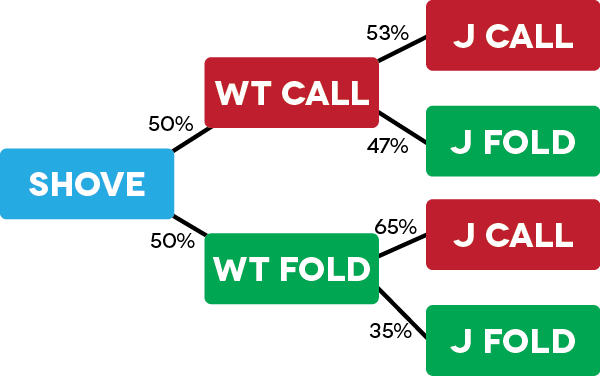 From here it’s just a plug & play situation. We multiple the percentages of each branch by the money we would win/lose then sum up the results of all branches. In this hand that means:

The sum of all branches equals -$205.15 meaning that Hero’s shove is very -EV. Of course, it’s -EV given the assumptions I made both in terms of ranges and frequencies. If you change any assumption, even just slightly, the entire EV will change. The better you get with hand reading and combo analysis the easier this kind of thing will be…so make sure you keep working on it.

In real-time you won’t be able to run this kind of poker math in your head. But enough practice and exploration will allow you to eyeball these things easier at the tables. Given the assumptions I made Hero should be checking the river behind and cutting his losses. There is something to be said for playing a draw aggressively when it misses…but this doesn’t look like the right spot for it.

Even if you didn’t like the hand, or you disagree with the range analysis, the big concept to take away from this is how to solve the EV in complicated spots. Whenever you get confused start by drawing that tree diagram. Think about the logical branches and just multiply each branch by the expected win/loss dollar amount. This is a great way to study hands away from the table and get reps with combos, ranges, math, and eyeballing the EV of new spots!

* You may make different assumptions about his range which of course will shift the folding frequency. If you disagree just plug in your numbers and proof the math. If you come up with any cool findings let me know!