Playing The Blinds Against Many Limpers

(View in 720p and/or check out the transcript below)

Hello, and welcome to another episode of ‘Ask SplitSuit a Question’, I am James SplitSuit Sweeney here for ThePokerBank.com and today we’re going to answer one of your questions. Today’s question comes from Chris R and Chris asks ‘What about blind play once the whole field limps in? What types of hands should I be looking to raise here? I have trouble defining what the best move pre-flop is, when too many people have limped in to really thin the field enough with a standard raise.”

Chris, that’s a great question and these are going to be dynamics that are more common in micro-limit games online or super-small live games like $1/$2 or $1/$3.  Here there is a lot more limping, a lot more pre-flop passivity, and you’re going to encounter this situation more often. So as to what range you should raise from the blinds when there’s a ton of limpers…

I suggest you start by raising very very tight, very very strong side-weighted. Even if you take a situation with say, pocket nines, and there are a lot of limpers…what do you really want to do with 99 there? Do you really want to raise? Because if you raise, what’s realistically going to happen? Well, we’re probably going to get at least one caller and then all of a sudden, everyone behind them wants to call as well and then you get this huge multi-way pot, with a very small SPR, with a hand that’s pretty tough to play in a multi-way pot. I mean you’re not going to hit the flop very often. How are you going to play over-pairs? How are you going to play second and third pairs? It’s just not going to be a very fun situation for you.

So again, I’m going to be raising the strongest of my range as a default; QQ+. Then hands like Ace-Queen and pocket Jacks tend to sit on the cusp. But even a hand like TT, which is usually a very strong hand is going to be very tough to raise in this kind of situation. Somewhat related to the pocket nines mentality that we just spoke about. 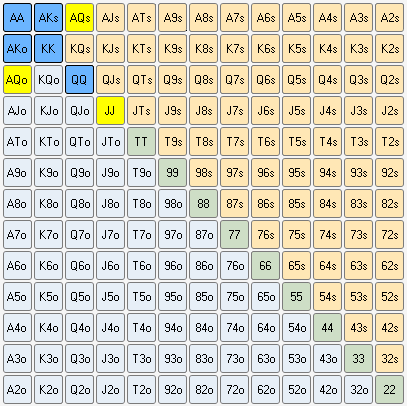 Another thing that Chris kind of hinted at at the tail-end of his question was that he’s having a difficult time thinning the field with a standard raise size. A lot of players, if they’re in this situation, actually choose a bet size that’s too small and it actually becomes counter-productive.

Say they’re playing $1/$2, there are a bunch of limpers to them, they raise from the blinds to $15 or $16 or $18, something like that, and often times, it’s just not going to be big enough. What’s going to happen is that one person is going to call, probably the original open-limper because they’re usually not a good player (their open-limp hints at this). So they probably limp-call and once that happens everyone behind them wants to call as well. Now we’re back in that huge pot, multi-way pot, with a hand that’s going to be very tough to play.

When you’re raising in this kind of situation, usually you want to raise a lot larger. Somewhere between 10-15x is going to be much more typical. These aren’t the most common situations in the world, unless you’re playing in a super super soft $1-$2 game or super soft micro games constantly. But when they happen, and you’re raising, again we’re going to be using that strong range, so we want to use a large raise size where we can ideally get it heads-up or maybe get two callers. We want to avoid getting 50 callers and getting everyone and their mother to call because that’s usually not going to be a situation where a hand is going to perform particularly well.

Now one quick note here, if you’re in a situation where you could raise to say $25, again playing $1-$2 with a bunch of limpers…if you could raise to $25, and everyone’s going to fold because that’s such a large size, you should actually start doing that with a pretty wide range of hands. You’re just contending for the pot, throwing a very large multi-way isolation out there and just trying to attack the pot. It’s a rare situation but if you ever find one, it can be a very profitable one and then your cards don’t really matter as much.

However, as a pure default, I’m going to be raising here very strong, again QQ+/AK as the default, Ace-Queen and Jack’s on the cusp and its just dependent on what you think the raises can accomplish. Is that going to get you a heads up pot? Is that going to get you a very multi-way pot? And how’s your hand going to perform best? If its not going to perform all that great, maybe I just limp it in. I’,m going to be folding a lot of the trash hands from the small blind and knocking a lot of the trash from the big blinds.