There’s a very common mistake that I see beginner NL players make all the time, in my conversations with them, on the forums, and at the table.  When asked why they made a bet or raise, their reasoning is along the lines of “I knew I had the best hand”.

Some of the time, this reasoning is perfectly valid – especially against bad players.  Bad poker players find all kinds of reasons to call with inferior hands, therefore betting/raising with the best hand will have a high probability of success.  But against good players, a raise with the best hand may not be the best play.  Let’s look at an example in detail.

My example hand comes from a chat I had many years ago with a fellow poker forum member who was also a coach.  We were going over some hands I had played online while trying to burn a William Hill Poker Bonus – he had agreed to go over one session with me and look for some obvious leaks in our game.  In one hand, a tight, aggressive player made a button raise, and I 3-bet him holding K♣ Q♥.  The villain folded and I won the pot.

“I knew I had the best hand most of the time”, I replied.  “This villain was stealing at about a 35% clip, a wide range that contains plenty of garbage hands”.

“Did you figure he would fold or call with all those garbage hands?” the coach asked me.

“He’s a decent player, so he most likely folds most of his range” I answered.

“So let me get this straight, your raise was for the purpose of getting him to fold hands that were currently worse than yours?”

That question stopped me in my tracks.  It’s true that my reasoning really didn’t make much sense.  If you know you have a better hand than your opponent, your goal should be to keep him in the hand, not blast him out of the pot.  Much like playing against a flush draw – our goal is to bet enough to get the villain to call and chase his draw with incorrect odds, not shove all-in and blow him off the draw.

Let’s look at some graphics to illustrate my hand example from above.  First, let’s look at what a 35% range looks like – this is the range that my villain was trying to steal blinds with from the button.  As I told the poker coach, it’s a wide and weak range containing plenty of bad hands, which you can see from this Equilab screenshot. 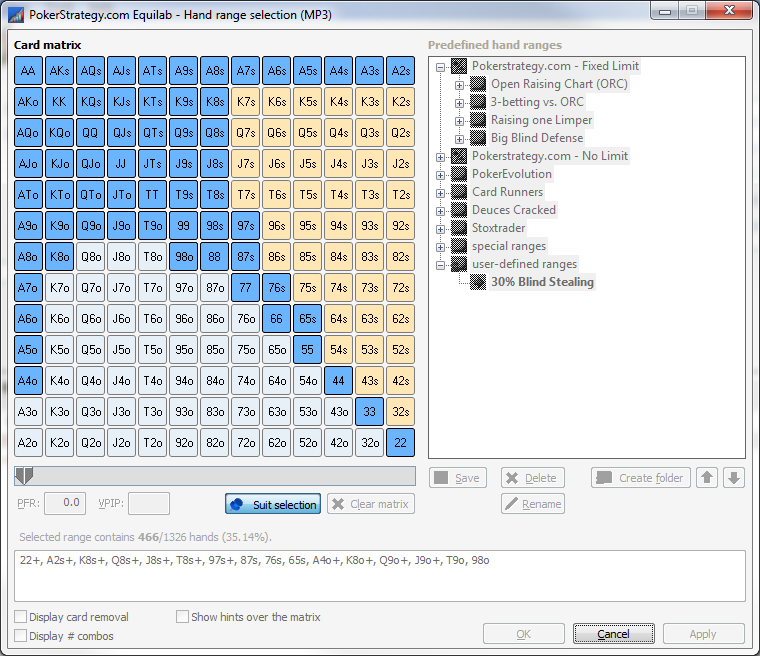 All pairs, most aces, some kings with crappy kickers, connectors, 98o.  We could argue whether to include or exclude certain hands in a button stealing range, but this makes up a good representative sample that gets us to about 35% of all possible hand combinations in holdem.  When you pit this wide, weak range against KQo, you find that KQ wins above 51.64% of the time.

So, KQ is in fact a favorite, but probably not as big of a favorite as you would have thought.  Why is it only ahead of this wide, weak range by 1.64%?  Well, the primary reason is that this range contains almost every hand combination with an ace.  Every hand with an ace is actually a favorite to KQ, not an underdog.  If you look at Figure 2, I’ve shaded every hand in this 35% range with its individual equity vs. KQo, and shaded it accordingly. 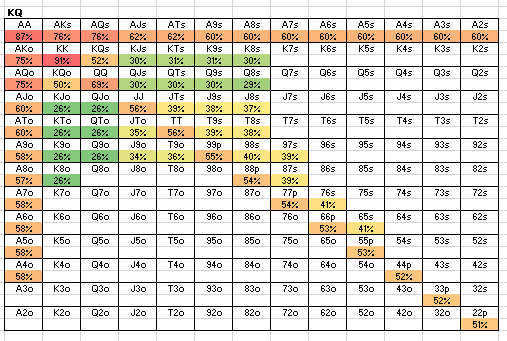 You can see we’re doing well vs. the green shaded hands, these are hands we’re dominating like KJ and QJ.  Are the yellow hands like J9 or connectors are in the 30% range of equity vs us, so they’re coming up in yellow shades.  But the Aces are all ahead of us, and the pocket pairs are all ahead of us as well.

So while we are technically slightly ahead of his wide, weak opening range, we are only barely so.  Many of the hands in his range are ahead of us.  What does this new information mean as we decide what play we want to make in this situation?

Let’s look a bit closer at what a TAG player would do against a 3bet.  In our live example, he folded, meaning his hand was too weak to see a flop with.  If you look at his total range, try and make some guesses as to which hands he folds and which hands he would either flat or 4bet. (assume we’re both playing at 100BB).  We’re getting into a large amount of judgment territory here – some villains will continue with many more hands than others, since they know they’re playing a pot with position. But Figure 3 is my attempt to show what hands a standard TAG would fold when facing a 3bet.  He’s folding smaller pairs, knowing he doesn’t have odds to setmine, and really everything else except the very strongest hands. 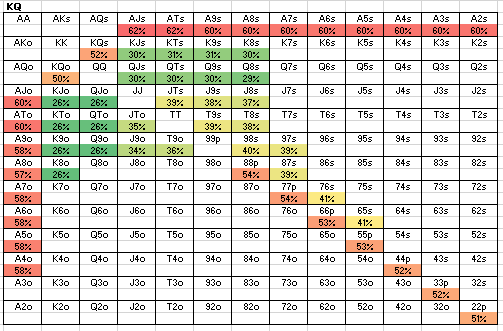 It should be apparent now that our 3bet was much more of a bluff than a value bet.  Even though we had the best hand much of the time, the result of our 3bet was to get him to fold hands that were slightly better than KQo, A5 or pocket 3s for example.  And getting a villain to fold better hands via a bluff is a perfectly fine result – it’s one of the ways we make money in holdem.  As it turns out, my 3bet with KQ was a good result but I was doing it for the wrong reason.

For some advanced homework, I would ask you to consider the same thing that my chat partner asked me to after reviewing this hand with me.  Even though we made a good play by 3betting with KQ and getting a fold, is it necessarily the best possible play?  What else could we have done?  Can we simply flat the raise and see a flop profitably?  Can we win even more money long term by allowing him to see a flop as an underdog, or does our lack of position erase our card advantage?