(Watch in 720p and enjoy the transcript down below)

Hello, and welcome back to another episode of ‘Ask SplitSuit a question’, I’m James ‘SplitSuit’ Sweeney, here for ThePokerBank.com and today we’re here to answer one of your questions. Todays question comes from Ron K and Ron actually asked a multi-part question and this is going to be part 1. Ron wants me to talk about ‘Flatting hands vs a table full of unknowns’. So let’s talk about that.

Let’s just assume a table of total unknowns. We just sat down, it’s our first hand, we’ve never played with any of these people. We don’t recognize a single person, have zero information whatsoever and what are we going to flat them with? Flatting is when we call a 2bet whether they open-raise, whether they isolate, whatever, we’re just calling a 2bet and what do we want to do that with? Well first and foremost whenever I call a 2bet, I’m always doing so with a plan, some idea of what I’m going to do when my hand hits and when my hand misses.

Is this a situation where I think my opponents going to do a lot of check-folding on flops? Is he going to cbet too much and play turns very face up?  Whatever it is…that’s with information. When you’re at a table of total unknowns, you don’t have that information. There is no such plan, so you’re kind of reduced down to defaults. And whenever you’re reduced down to default actions, it means you[re reduced down to default ranges. So when I’m in a situation like this, I’m usually going to be flatting very very selectively, not very often at all. I’m usually going to be taking setmines when the math is correct and the stack sizes are deep enough vs the open-raise that sort of thing.

When I’m at a normal table, I’m going to consider set-mining from say middle position and I’m always looking behind me for squeezers etc. But again at an unknown table we don’t have that information so I’m definitely going to be looking for set-mine situations, I’m definitely going to be set-mining a little bit more as a default, especially from later position because there’s less players that could possible squeeze. Getting less players to contend with and I have a situation where I’m going to have position more often if I do so from late position, which is obviously good for us. It also makes post-flop a tremendous amount easier.

Other than that, I’m not going to be doing much flatting. I’m not going to be calling many raises with Ace-X suited or that sort of thing, simply because I don’t know if its going to be good, I don’t know if the implied odds are right, I don’t know how I’m going to make money the large chunk of the time that that hand misses. I did a full video about playing weak aces preflop if you’re interested, how that kinda hand-type hits but its not very well and it’s in a very very specific kind of way. So its not the kind of hand-type that I want to do a lot of calling with.

I’m usually going to veer away from doing a lot of calling, from any position with junk broadway hands like Queen-Ten or King-Ten suited. I’m going to be very very selective with those, and especially when I’m out of position. In-position …. probably not even at a total unknown table. Those are the kinds of hands that I usually want some information some idea on how far I can take top pair postflop. If I don’t have that idea, how the heck am I going to play the third of the time that it hits? Its going to be very very difficult to do so. 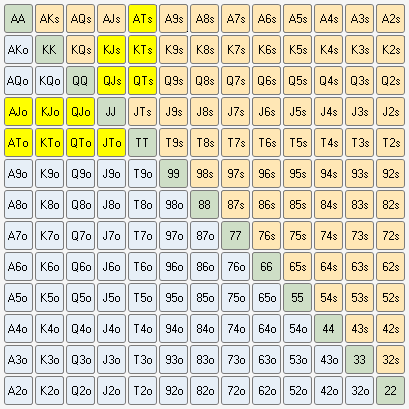 So I may call some strong double broadways that I wouldn’t default 3bet, like maybe an Ace-Queen against the middle position raise that sort of thing but I’m going to be pretty selective. Again, not giving action a tremendous amount of ways, and I’m not giving action with every suited gapper, or every suited Ace, or any double-broadway combo…and even more so when you’re out of position. Be very selective with these hands. If you’re calling here more than 10% of the time I can almost guarantee you that you’re leaking and even if you’re calling at say 10 or 9.5 percent, that could still be a little bit too loose especially if you’re not particularly strong post-flop. If you’re still building your postflop skills that’s OK, but don’t put yourself in spots where you have no information and you’re trying to figure the best line with a range that probably isn’t super correct.