Checking The Best Hand For Value

My favorite poker book right now is “Poker Plays you can Use”, by Doug Hull. This book is just loaded with great example hands and specific lines you can take in well-explained situations.  Doug doesn’t just describe how to play the example hands – he describes our reads, why we’re making the play, and how it might look to the villain in question.  In short, he gets us thinking like a real poker player.

In the spirit of Doug’s book, here another play that I have used in certain situations – maybe you’ll find it useful too.

In this hand, action has folded around to us, we’re in late position with A♦ 3♣.  At this particular table, the loose players on our right have already folded, and the tight, straightforward players are on our left.  Our junky ace isn’t worth much but it’s certainly worth trying to steal the blinds in this situation.  We make a standard raise up to 3BB.  The small blind folds according to our plan, but the big blind defends this time and calls the raise. We see the flop heads up. 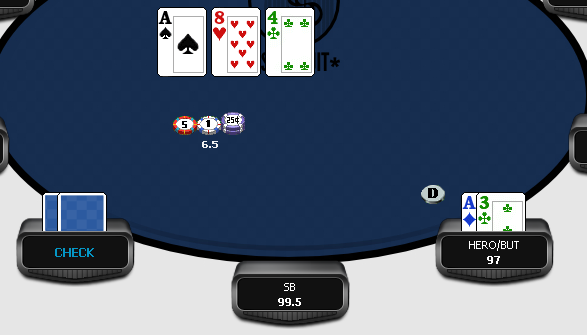 Note how dry this board is.  We don’t have many draws to worry about in general and probably even less so with this opponent – remember, we have already pegged him as a tight, straightforward player, which is why we tried to steal his blind in the first place.  Tight straightforward players usually don’t defend with hands like 56 or 67 – these hands are tough to play out of position. Even if our opponent had one of these hands, both of them just give him a gutshot straight draw – not much for us to worry about as far as getting “caught” with our top pair.

So really, what type of hand could our villain have on this board?  He could be holding several ace-x hands that beat us.  Maybe he would have three-bet us with Ace-King, but Ace-Queen, Ace-Jack, and every other ace except Ace-Deuce beat us right now.  We’re not sure how far down the kicker scale we should put in this tight player’s range, but certainly every ace-x he’s willing to play beats us right now.

As for hands that he’s holding that we’re beating, I can see a player like this defending with KQ, maybe KJ or JQ (moreso if suited), and lots of pairs. Here’s a Flopzilla chart showing how we’re doing vs. those hands. 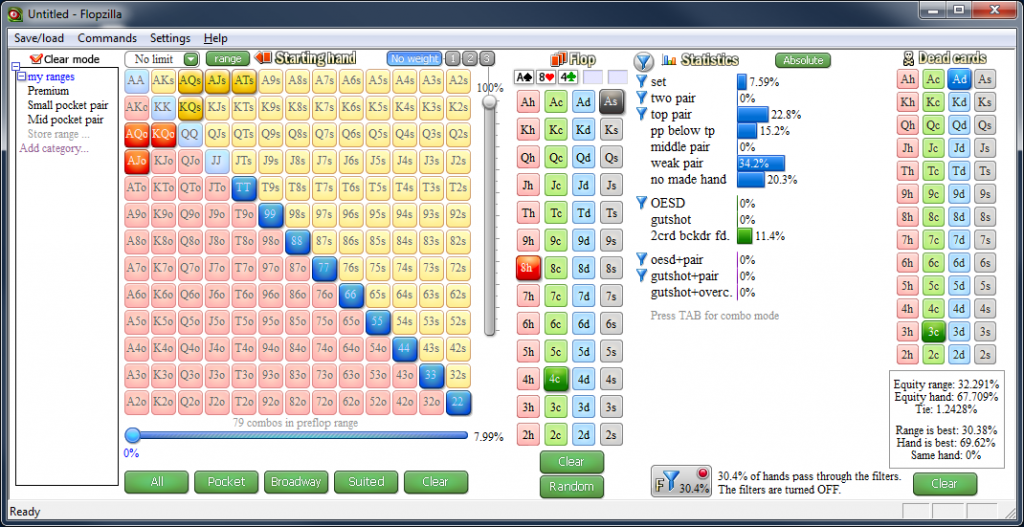 The lower right of the screen shows that we’re nearly a 70% favorite vs. our villain’s range, and we know that if we’re ahead, we’re probably going to stay ahead (unless he spikes a two-outer on us with a pocket pair).  Furthermore, if we’re behind (his bigger ace, mostly), we’re probably going to stay that way, unless we spike a 3-outer on him to give us two pair.  This situation is often called a “Way-ahead-Way-Behind”, or WAWB, type hand.

We’ve got what I would classify as the higher-end of a showdown-value hand.  We certainly don’t want to be pumping the pot with money and getting stacks in here- any hand willing to play a big pot is probably better than our pair of aces with useless kicker.  And if our opponent doesn’t have an ace, then he’s certainly not loving this board much either with all his other unpaired broadway or pairs.

Since we don’t want to bet three streets, and we’re not much afraid of our opponent catching up with anything, I find that the best play here is to check the flop behind.  This play is sometimes called a “check for value”, because it makes our opponent comfortable with most of his pocket pairs, it can also lead to villain hitting a pair of kings or queens on the turn and feeling comfortable with that pair.  In short, our flop check often waves the “I don’t have an ace” flag to our opponent.

Once we check the flop, we’ve got a clear path to showdown.  Some villains will feel the “all clear” to bet turn and river with a hand like pocket nines (given safe turn and river cards), and we can call both these bets and get to showdown without putting more than 30BB in the pot.  If the villain checks the turn, we can make whatever bet size we feel like he will call with his pairs.  If a king or queen comes on the turn, I would bet a little bigger, hoping he’s got a second pair now. (his smaller pairs will hate that second overcard and probably give up).

Our flop check accomplishes many goals – it gets us to showdown with a showdown-value hand, and it often gets us value from second pairs who have mistakenly had their “he has no ace” light turned on. Finally, if there are any opponents at your table who are trying to read hands based on your lines, you will have put in their head that you can check hands as strong as top pair, meaning that a check from you doesn’t always mean you have nothing or are slowplaying a monster like a flopped set.