Defend Your Button In Poker

In my first article TAG Poker Explained, I mentioned that one way to exploit someone playing the standard tight-aggressive (or TAG) playing style, was to defend your button often against him.  Let’s look at a hand I played a few months ago in some depth to see an example why defending your button can be so effective.

This hand comes from my Friday night $.50/$1 home game, a small game where about 6 regulars and a dozen or so occasional players meet on Friday nights.  My opponent is a pretty good instinctive player – he doesn’t study the game but is fundamentally sound and rarely makes big mistakes. On this evening, his stack is up a bit from his starting point, and he opens to $4 from middle position. I call on the button, and we see a flop heads up.

Why did my friend smile?  Well, probably he missed this board entirely, maybe with a hand like Ace-Queen, or maybe his pocket tens or jacks didn’t like the king.  But he also knows from his experience with me that there’s a good chance that he’s just folded the best hand to my raise on this board, and he can’t really do anything about it, even if he did have a nice pair.  Let’s take a look at some of the hands I might raise up here.

This would be known as “flopping the world” – I’ve got an open-ended straight draw and a flush draw.  This hand is a favorite over pocket aces, pocket kings, and Ace-King on this board.  Read that again – I am a favorite over the range top pair/top kicker, overpair pocket aces, and top set pocket kings right now (assuming if we get to see all 5 board cards). My raise is strictly for value, I’m going to have the best hand most of the time by the river, and I’m hoping “worse” hands call me. (I put “worse” in quotes because they might be better hands now, but I have a great chance of beating them).

No straight draw this time, just a naked nut flush draw.  My raise is a semibluff, I would love for him to fold his hand right now, but if he doesn’t, I’m going to spike a flush about one in 5 times on the next card, and a turned ace might even be good (when he has KQ/KJ, for example).  I am about a 50/50 coinflip vs. his entire opening range (see more about his range below).

Flush draw and a gutshot.  About the same equity as the hand above, replace the Aces as good cards for me with tens.

No flush draw this time, but 8 cards will give me a straight.  Some of you might caution me that two of those eight cards are spades and therefore my straight might lose to a flush.  While this is technically true, I still count those spades coming as good cards rather than bad ones.  Why?  Because my thinking villain doesn’t know what I have.  He knows I like to semibluff my draws, and if he decides to continue on with this hand, and the spade draw hits on the turn or river, it’s only natural for him to put the story together than I semibluffed a draw and the most obvious draw got there.  Whether I have that draw or some other draw is immaterial.

Well now we’re getting to some pretty weak draws – I’ve got a gutshot straight draw and nothing else.  4 outs, one of them makes a flush.  To repeat though, he doesn’t know which draw I have.  So a queen gives me a real hand, and a spade gives me a board that my opponent will fear.

You can see how many different types of hands, at least on this particular board, are going to give my opponent problems.  The truth is, this board presents so many problems for my opponent, it really doesn’t matter what two cards I’m holding.

Not totally sure how to play draws? Click the image below and learn today: 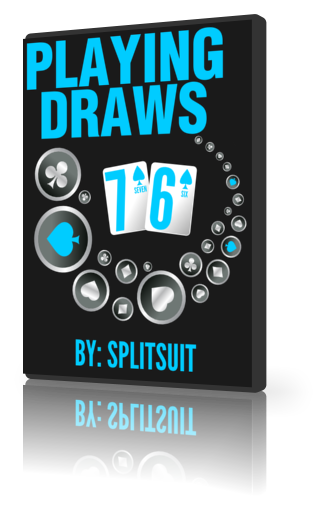 To see why, let’s take a look at my friend’s range using the Flopzilla software.  I would estimate his opening range from this position at about 15%, which I’ve put into the left side of the program, shown in Figure A.  His range is all pairs, all suited broadways and most unsuited broadways as well.  I also entered the flop into the middle section, and then switched the “Statistics” button to show cumulative results rather than individual results.  What the Statistics second is telling us is that my friend has top pair or better only 29.5% of the time, less than one third.  This means that 2/3 of the time, he’s going to have to fold his.  When I know that someone has to fold their hand 2/3 of the time, I see a pretty profitable situation in front of me. 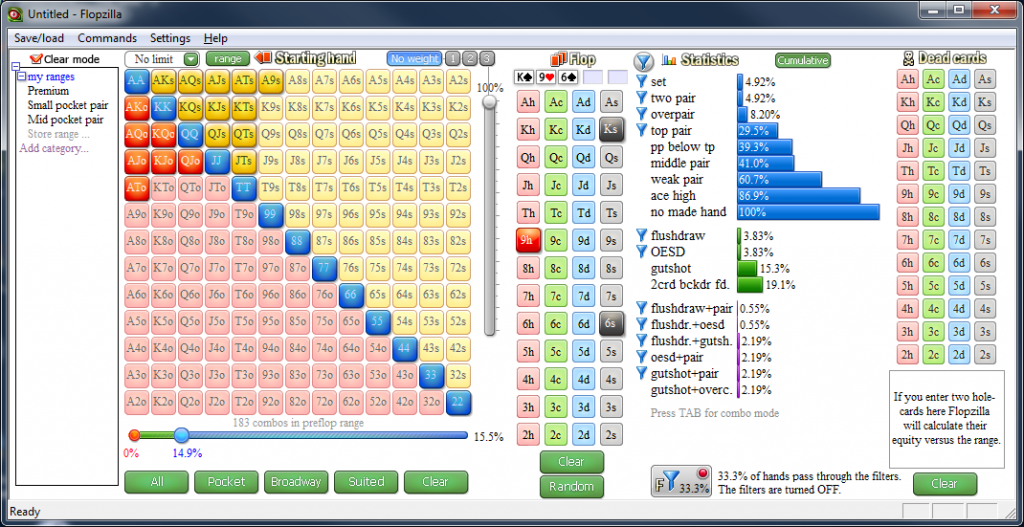 Learn how to use Flopzilla with this free in-depth video

I would contend that 29.5% is even too high, though – there’s no way my villain continues with all his top pairs.  This number includes top pairs with weak-ish kickers, hands like KT and KJ.  Is my decent, TAGgy opponent getting his stack in the middle with KT?  I don’t think so.  So he’s continuing with a range even lower than 29.5%.  Some TAG opponents refuse to go broke on one pair at all – On this board,  that would mean our opponent would only continue with the 3 sets, which he has flopped less than 5% of the time.  These “never go broke on a pair” guys are folding over 95% of the time on this particular board!

Clearly, if I can get into situations where I can get folds 95% of the time, I have turned my friend into a broken ATM machine, spewing cash out to me, in certain situations.  I will close with a few notes of caution, though.

And one final word – once you become known to your opponents as a semi-bluffing guy, there’s one last adjustment you make.  You raise the flop with your sets, too.  A month or so after my K96 hand above, I got into another hand with my same friend, very similar to this one.  He raised and I flatted on the button.  This time, the flop came Ace-Ten-Four, with 2 hearts.  He bet into me, I raised again, and he agonized over what to do this time.  “Set or flush draw, set or flush draw?”  Finally, he shook his head, said “dammit”, and folded Ace-King face up.