Are You Positionally Aware?

Poker is just like American real estate – both are all about location, location, location.  In poker of course, your location at the table relative to the button is called position, and every poker book, article, and hand history conversation will bring up both your and your opponents position as part of the thought process on how to play the hand.

Every single person who looks for resources to improve their poker game hears about the importance of position over and over.  You know position is important, but do you live it?  Are you really positionally aware at the poker table?  Let’s go through some scenarios and find out:

For this batch of hands, let’s assume we have a normal 100 big blind stack at a $1/$2 live table.  Our table is the usual mix of awful players with one or two people who seem to know what they’re doing.  To add some spice to the scenario, let’s also say we’ve had one of those soul-crushing card-dead sessions where we’re just going scream if we see another Jack-Three offsuit.

Ok, we’re under the gun, and we’re first to act.  For each of the following hands, decide if we should make a standard open raise (which has been $12 or $13 at this table), call the $2 big blind (limp), or fold.

Anyone who answered “limp” for any of the hands above, 2 minutes in the penalty box for you.  No open limping!  (That’s a concept for another article).  So that leaves either raising or folding, and the correct answer most of the time for all of the hands above is to fold them in early position!  Of course, every answer in poker can always be boiled down to “it depends”, and we can certainly take a shot at a raise every once in a while when our image is tight and we think there’s at least some chance that we’ll take down the blinds without a flop.  But those chances are at their lowest from early position – every person to act after you increases the chances of waking up with a hand.  Additionally, if you were to open raise every one of these hands, you would be playing far too many hands from early position.  Including all of these hands in your raising range from under the gun would put you playing somewhere around 20% of all hands, and that’s way too many from UTG at a full ring table. 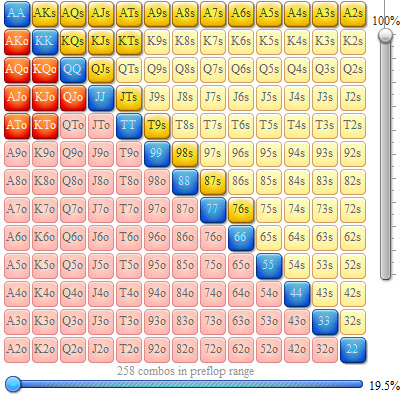 So, believe it or not, the answer for how to play most of these hands from under the gun, most of the time, is to fold.

Next scenario.  You’re at a wishy-washy table with lots of players that like to see flops (lucky you).  Three people have limped so far, and you’re on the button.  What will you do with each of the following 4 hands.

First, the “no open limping” doesn’t apply here – we have three limpers ahead of us.  I don’t like a raise here with anything except pure value hands because we’re not going to get everyone to fold often enough to make it profitable.  But because we’re the button here, and only because we’re the button, we can limp along and play “hit to win” poker with a wide range of hands.  Note that positionally aware poker can work in our favor, too.  Sure, we have to fold tons and tons of hands from early position, but we get to make up for it by occasionally playing some garbage in late position.

Of the hands above, suited aces are always good for taking a shot at the nut flush, and my second and third choices are suited as well.  The last choice, an unsuited connector, is something I’m not playing very often but will throw it in every now and then.  When on the button, I’m looking for suited (high cards preferred) or connected – don’t use the button as an excuse to play 95o and J2s.  Once again, we have to be careful about which range of hands we play in any situation or we end up playing way too many junky hands.  So be selective with your junk.

Last situation, this time you are on the button again at that same wet-noodle table, but this time there’s only one limper so far.  Which of the following hands will you play, and how will you play them?

Not a great selection of hands here, but having one limper instead of three makes all the difference in the world.  Here, our best play is to raise every one of these hands to something like $15.  Our goal is to either make the limper fold the typical junk he plays, or better yet call with it and then try and hit a flop.  (This is known as an isolation raise, and it’s an important part of a good poker player’s game). We know it’s hard to hit a flop in holdem, so we will bet $18-$20 into the $33 pot on the flop and get folds plenty often enough to turn a profit.  In the case of holding an ace hand or a suited king, our raise often serves as a value raise (if villain calls with JT, then we’re raising A4 and KT for value, because he’s calling with worse).  In the other cases, our suited and/or connected cards give us a backup plan for when the villain sticks around for our flop bet.  Maybe we have a draw by the turn and can keep our aggression up, or we’ve flopped a set with our small pair of threes.

Of all the situations above, how did you do?  Are you truly thinking of hands in terms of position, or do you just pay lip service to the importance and get yourself in trouble playing too many pots with people to act behind you?  And when you have the button yourself, are you taking advantage? (Hint: a great way to do this is by defending your button)