Should I Always Open-Raise To 3x?

(Turn to 720p and/or read the transcript below)

Today’s question comes from Jaume and Jaume asks, “What parameter should we consider when choosing our open raise size and should this default size change depending on the stakes we are playing? Is it +EV to vary the size while playing attending to our position, our hand strength, and the types of villains in a given hand?”

So Jaume, that’s a great question and you kind of hit the nail on the head at the end as far as the different considerations we want to consider in these spots and that is who is left behind us, what’s our position, and what are our exact whole cards?

There’s kind of two different schools of thought when it comes to open raise size strategy. First thought says, “Never change it, open stay the exact same, extremely static in your open raising size.” Then the other says, “Be extremely dynamic, it’s okay to change, that’s okay, we can adjust and go from there.” Now I’m more in the school of thought of play dynamic and adjust and it’s okay to use different open raising sizes in select situations.

One situation where I would not use that, where I would actually stay very static in my open raise sizing is when I’m playing against good, competent opponents. Even if there’s just one soft spot in the game but everyone else is decent and competent, I want to be very careful in that situation because I don’t want to make it where I raise bigger with my big hands and smaller with my not-so-big hands, and make it very easy to mess with me. If I raise bigger and I’m representing a much stronger range of hands, well, obviously they can call it a lot of stuff, trying to suck out on me and it’s going to be very difficult for me. Whether I raise big or small, I’m kind of turning my range face up and allowing them to do different things against me. But again, that’s against a good thinking, competent opponents. Against dumber opponents or players who just don’t really think like that, then I really prefer using more of a dynamic strategy where my sizes will change. 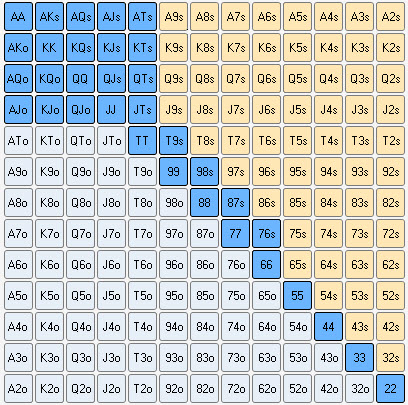 So in weaker games, like micro limits online poker or smaller live games, like $1/$2 or $1/$3, those are going to be games where I’m assuming most of my opponents are weaker and thus I’m going to be using a more totally dynamic raising sizing strategy. Again, a competent opponent would figure this out, if I’m raising 15 with aces, bid 10 with say my ace jack, well, it will be very, very face up to them. But against an opponent who is only really paying attention to their own whole cards or is paying more attention to the game on the TV or is paying attention to anything other than what my size reps about my range, then I’m definitely in a situation where I’ll be more dynamic with my raising size. That’s okay.

Take a situation when you’re in an early position with aces in a live game, if you’re sitting there and you would raise to say 10 and you would end up getting 5 or 6 callers, but you could raise to say 16 and end up getting only 1 or 2 callers most likely, well, why not choose the larger raise size with your bigger hands. It creates a decent SPR with that kind of hand, it creates a great situation, you don’t have to go super multi-way, and ultimately you’re getting more value for your hand. That’s a great situation for you, whereas if you just stuck with your default open raise in size, you may create a situation that’s not as optimal just given the exact table and position that you’re in.

One last little note that I want to put here as far as weak players. When I say weak, I don’t just mean the loose, weak, fishy-type opponent. There are also players like weak nits, the kind of players that are just say, going to fold regardless of what my raise size is. If you take a situation like that, then I may actually steal for say a smaller size. Say you have a really weak, nitty opponent who is in the blinds, they’re going to fold kind of regardless of your size, why not choose the smaller of your steal sizes? That would make sense, they’re still weak, they’re just weak in a different way, whereas if you have a weak, fishy opponent, obviously going bigger with your value hands is going to make a lot of sense as well in a strictly value mindset.

So Jaume, thanks for the great question and hopefully this gets you started when it comes to being dynamic with your open raise sizes. Just remember, always think ahead and consider what that size is going to do and how profitable or how optimal that bet size will be maybe compared to a couple of other ones.