Use A Poker Player’s Lines Against Them

Good poker players are always paying attention, even if they’re not in a hand.  Players are always giving off clues as to their playing style, their thought process, and therefore their holdings. Things learned while not in a hand will often be useful when you find yourself up against these same villains later.

In the first example, I was up against a villain who seemed like he fairly decent player.  He knew how to fold, and he seemed to be positionally aware.  Finally, he looked like he understood continuation betting.  My observation of him was that he usually came into a pot with a raise, and he almost always followed up that raise with a bet on the flop.  In the span of three hours, I saw him make a $12 preflop raise (we were at a $1-$2 table), and then follow with a $15 continuation bet.  I never got to see a showdown in these three hands.

Here’s one important tip when observing opponents – if you see someone do something several times in a session, then that something is more likely associated with him holding weak cards than it is likely that he has a strong hand.  Why do I say this?  Because (as we all can attest), it’s hard to have a strong hand in Texas Holdem.  Most of the time, our hand isn’t much to be very proud of.  So in any random sample of a player’s hands – it is way more likely that he is holding weak hands than strong ones in the majority of that sample.

…it’s hard to have a strong hand in Texas Holdem

So, when I see a player take the same line two or three times, I start to think that this is the line they take when they’re weak.  Seems reasonable.

Continuing on with my observations, I also noticed this same player would follow up his $15 flop bet with a $20 turn bet.  The size of this bet got my attention.  In a heads up hand, the size of the pot on the turn is roughly $56, give or take a few bucks depending on the blinds.  His $20 bet is pretty small for any type of value hand – he’s betting around 1/3 pot.  This gave more evidence to the fact that his holdings were weak.

Remember, I wasn’t in any of these hands – I was just trying to read my opponent’s lines and tendencies.  But a few hours later, this same opponent open limped into a pot, and I was on the button holding A♠ 2♠.  My suited ace was well worth attempting an isolation raise, so I bumped it up to $15, thinking that my combination of position and show of strength might get this opponent to fold preflop.  However, he decided to call this time.

I was pretty happy when he decided to call, too – because the flop came out all spades – K♠ 9♠ 4♠.   I had flopped the immortal nuts.  My work wasn’t done, however, I had to figure out how to extract the most money from my opponent as was possible. 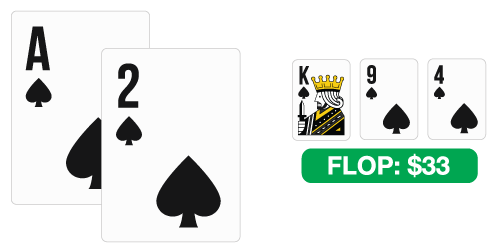 Most players will check their super-strong hands on the flop – I am personally against slowplaying for a ton of reasons.  The most important reason is that I want to win a big pot with my big hands.  I understand that this won’t always be possible – sometimes my opponents won’t have a hand they want to go to the wall with, but I’m inclined to try and build a pot most times I have a monster hand.  But of course I don’t want to scare away my opponent if possible.

In recalling his previous action, I decided to try and mimic his $15/$20 continuation betting line.  If he associates this line with a weak hand, maybe he will recognize that I’m taking that same line and incorrectly conclude that I have a weak hand this time.  After he checked the flop to me, I made the $15 flop bet, and followed up with a $20 bet on a low, red turn card.  He fell perfectly for the trap and checkraised me all in on that turn bet.  Of course, I beat his chips into the pot and flipped my hand over.

I never got to see what he had – my guess is that he had some type of king with a decent spade, maybe K♠Q♠ or K♠J♠.  A flopped set probably plays a monotone flop faster, so I’m thinking he had top pair with a flush draw, and decided to try and push me off my hand once he got the (fake) all-clear that I was weak.

In the second example, I once again mimic a player’s “bluff line” when I want a call.  This hand is much different than the other one, though – because the opponent’s “bluff line” was much different. This villain was a much more fishy player – he was involved in way too many pots, he was not positionally aware, and his favorite line was pretty obviously not a real hand.  He liked to make tiny little bets (say $6-$8) on the flop and turn, and then bomb the river with a $45 bet. 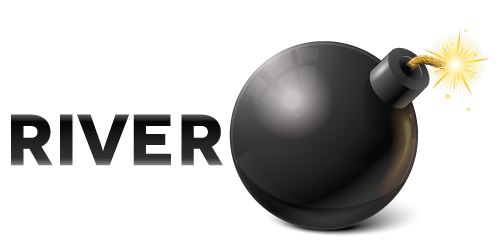 Most of the time, he got his opponent to fold with this silly-big river bet, so I wasn’t able to see his cards.  But like before, I was able to deduce that his line represented a weak hand, just from the basis that people have bad hands more often than good.  For this opponent, though – I got a little better proof in a hand where he used a much more standard river bet size, got a call, and showed down a clear value hand (a straight, I believe).  This was more evidence that the big river bets were bluffs, since he changed his action greatly when he held a good hand and wanted a call.

Once again, I was able to use this information against my opponent later in the session.  I raised holding Ace-Ten offsuit, and my opponent called from the blinds.  I flopped middle pair with a QT4 rainbow flop and made a continuation bet.  My opponent check-called this bet.

The turn card was a nine, and my opponent checked again.  This wasn’t a great card for my holding, and I felt like it improved many more his hands than mine, so I checked back.  I also wasn’t afraid of him bombing the river – this was a line he reserved when he was the aggressor in the hand.  When he did not have the initiative in the hand, he was more of a standard calling-station type player.

I got a nice surprise on the river when an ace fell, giving my two pair.  My opponent checked.  I felt like I had the best hand here most of the time.  I now beat any two pair hands he could hold.  King-Jack was the nuts, so I would have to strongly consider folding to a river check-raise, but that’s not enough reason to not bet.  There was still value to be had, especially against this player. 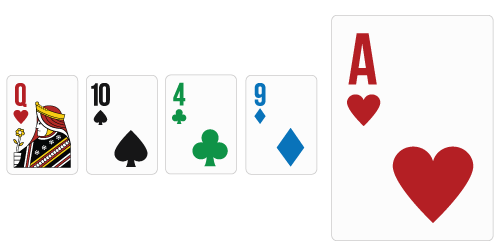 I was contemplating my bet size, and originally settled on a $25 bet into the roughly $54 pot, but then I recalled that this player’s bluff line was a bigger bet.  Could I make him think I was bluffing with a similar bet?  I moved 4 more $5 chips into my little pile and slid $45 out there.  My opponent looked at me warily, then made the call.  I flipped my cards over and watched him muck his hand.

Players always have a reason for every action they take.  If you can decipher that reasoning, you can often copy their lines and get them to think you have a different hand then you do.  My two examples here were getting calls with strong hands by trying to copy my opponents’ bluff line, but you can also zero in on a bet size that looks like a “value” size to your opponent and get folds.  The trick is to pay attention constantly and pick up as much as you can.